CO2 compensation is no selling of indulgences!

Doing good is not wrong, just because the motive is debatable.

I have recently received one of the newsletters from my friend Richard Häussler from Berlin that was well worth reading. It began: “It will serve my father right if my hands get frostbitten!”, said the boy, “Why doesn’t he buy me gloves?” This quote comes from the Swiss poet and politician Gottfried Keller (1819-1890). It is usually used to reveal an attitude that turns moral indignation and blaming on others into self-endangering passivity and irresponsibility. Instead of acting pragmatically and protecting his own fingers from freezing, it is more important for the boy quoted to carry along the concept of his own incompetence.

Another well-known scientist and author, Prof. Dr. Radermacher, describes something similar in his book “Der Milliarden-Joker” (“The Billion Joker”): 10% of the richest world citizens generate 50% of greenhouse gas emissions. If today, these wealthy people still invested a few hundred or thousands of Euros in reforestation and forest conservation, it would be more helpful to the world than their talking about the moral dubiousness of compensation heard for years.

Recognizing our exuberant lifestyle and reducing consumption is undoubtedly the right thing to do, both morally and objectively. But before this becomes reality, reforestation, which has been widely recognized and successfully implemented for centuries as part of the “natural climate solutions”, is easy to practice, always the right thing and inexpensive (compared to other measures taken to remove carbon from the atmosphere). Even more efficient and effective, not least for the preservation and increase of biodiversity, is only the largely unknown primeval forest conservation.

With just a few clicks, you and I can invest our money in Gold Standard certified projects for the preservation of the primeval forest. I myself saw and was able to experience how, for example, https://www.carbontanzania.com successfully protects thousands of hectares of valuable primary forest from safe deforestation in Tanzania. Following strategies that have been tried and tested internationally, the biodiversity of the primeval forest is assessed and the forest use is mapped in a “land use plan”. Together with the government, it is determined for decades how which part of the forest may be used by the locals: where arable farming is allowed, where livestock are kept and where rangers must actively protect nature from deforestation and poaching. 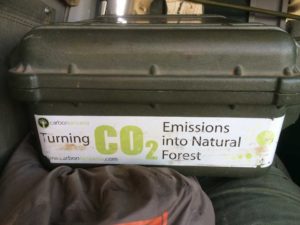 Everything is checked several times, and ultimately an estimate of the sustainable and additionally bound amount of carbon is made (because without active protection, the forest would be cleared for charcoal and cattle breeding). Carbon credits are awarded for these quantities that are then set aside.

Criticisms, such as high administrative costs and uncertainties in the implementation itself, must be checked for every project. At Carbon Tanzania, I convinced myself of their serious and sustainable work. I am often asked why this is being done in Africa and not in Europe. First, because credits from compensation projects can only be recognized outside Europe. And because forests near the equator grow much faster than in Europe.

For the same money, carbon is bound much faster. Regardless of this, it is definitely the right thing to do for us to rebuild our forest, battered by drought and bark beetles, to make it sustainable in the long run. However, from a global perspective, this is a zero-sum game: we will not bind any new carbon if we do not massively assign new areas to forests.

What does this have to do with pet care and pet ownership in Europe? Quite a lot, if we realize that our lifestyle, on which only very few voluntarily cut back, accounts for average emissions of approx. 10 tons / year of 2  equivalents. According to the current status, one dog contributes an average of 630 kg CO2  equivalent to this. We can compensate for this for little money, and we should start doing it this very day (e.g. here https://www.carbontanzania.com/buy-carbon-offsets/buy-offsets-2/).

The greenologist courageously greens up brands, people and markets!

Previous article
Meat or no meat, that is the question

This site uses Akismet to reduce spam. Learn how your comment data is processed.